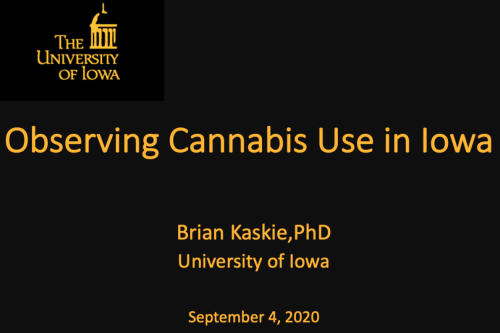 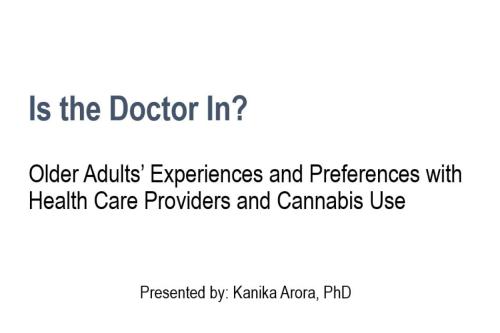 Kaskie, B. (2019) SPEA Workshop - The Growing Intersection between Cannabis and Older Persons 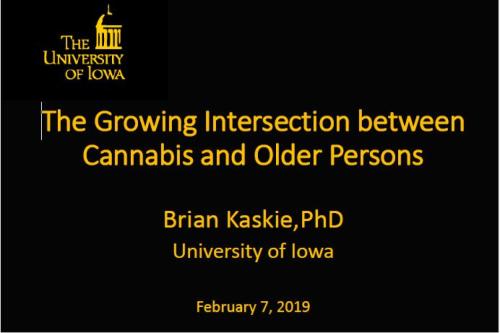 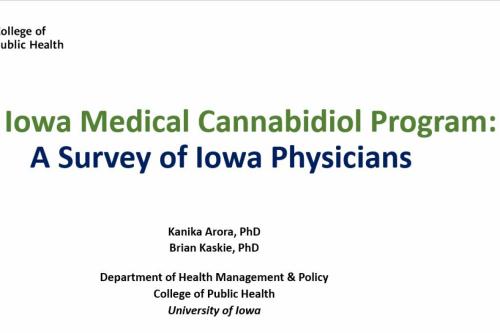 Since the Illinois Department of Public Health (IDPH) started accepting applications for the medical cannabis program, older adults have been disproportionally represented.  Individuals over the of age of 50 have accounted for nearly half of program participants while persons under the age of 30 make up less than 10%.  According to the IDPH, the most common diagnosable medical conditions experienced by older adults include cancer, glaucoma, cachexia, pain, and nausea—conditions that all are considered amendable to medical cannabis.  The IDPH also reported that cancer and fibromyalgia are among the most common reasons individuals are qualified for the cannabis program (note: the state currently does not extend participation for the management of pain, nausea and other related symptoms).

The goal of this research project is to close gaps in what is known about older persons who are participating in the state of Illinois’ medical cannabis program, and we look to illuminate  the motives, patterns and outcomes of cannabis use.

The OAPP was established within the context of a nationwide epidemic of fatal opioid-related drug overdoses. Between 1999 and 2016, opioid-related overdose deaths in Illinois increased from 3.9 per 100,000 persons to 15.3 per 100,000 persons. The use and misuse of opioids also varies considerably across the state. Meanwhile, researchers have observed that states (including Illinois) offering legal access to cannabis had lower rates of prescription opioid use and suggested individuals were substituting cannabis for opioid prescriptions.

Pursuant to the Alternative to Opioids Act approved in August of 2018, the IDPH launched the OAPP on January 31, 2019 (http://www.dph.illinois.gov/topics-services/prevention-wellness/medical-...). The goal of the OAPP is to curtail the opioid epidemic in Illinois by permitting access to medical cannabis for individuals age 21 and older who have been (or could be) prescribed a pharmaceutical opioid by a licensed Illinois physician. Illinois is the first state to establish a program like the OAPP.

The goal of this research project is to evaluate the state of Illinois’ Opioid Alternative Pilot Program (OAPP). We reach this goal by: (a) fielding separate surveys of program participants, certifying physicians, and dispensary directors; (b) analyzing key features of the OAPP including program participation, operations, and outcomes; and (c) identifying strengths and weaknesses of the OAPP, and recommending viable alternatives to improve and expand the program.

In Iowa, only physicians (MD or DO) are able to certify a patient’s condition.  However, they do not require any special training or a specific certification to do so.  As of October 2019, about 900 unique Iowa physicians have certified approximately 5,000 patients for various qualifying conditions.  About 43% of program population is above 60 years in age, and “untreatable pain” is the most commonly certified qualifying condition.

Using original survey data from a sample of certifying Iowa physicians this study will explore physicians attitudes toward medical cannabis, physicians’ knowledge about cannabis, and the key characteristics of those physicians who participate in the Iowa Medical Cannabidiol Program.

End-of-life (EOL) care begins once a patient has stopped treatment to cure or control a terminal condition, and the hospice model is demonstrated to improve the quality of life experienced by those with terminal conditions.  With a treatment model driven largely by patient preferences, hospice care is particularly open to the inclusion of complementary and alternative, non-pharmacological methods for pain management.  Medical cannabis stands as a form of complementary and alternative medicine for managing pain and other symptoms, with growing clinical evidence to support its application for patients at EOL.

This study seeks to frame a more complete understanding of the differences observed in terminal populations choosing different treatment pathways as they approach EOL, the attitudes and experiences that shape hospice choice making for medical cannabis users, and potential outcome differences for medical cannabis users who are choosing hospice instead of palliation in combination with traditional curative therapy approaches.

By 2020, the number of Americans who provide at least ten hours of monthly informal care to someone with Alzheimer’s disease or a related dementia (dementia) may surpass 17.0 million. Meanwhile, researchers have identified a number of ways that “self-care” may improve outcomes such as reduced caregiver burden and stress, and how these outcomes may contribute to improving outcomes for the care recipient. Still, we know little else about the ways caregivers are taking care of themselves. Within this space, we particularly are interested in the role cannabis plays in self-care among caregivers. There is a critical need to determine what constitutes viable and detrimental forms of self-care in terms of relieving caregiver burden, addressing unmet health needs, and improving the outcomes experienced by persons with dementia. Our goal is to close the gaps in what is known about self-care including cannabis use) among informal caregivers of persons with dementia exploratory study, and we do so by engaging the population of informal caregivers who are enrolled in the California Alzheimer’s Disease Centers’ (CADC) Rancho Los Amigos Clinic.